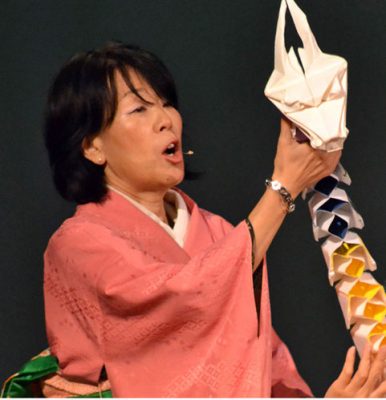 A native of Japan, Kuniko Yamamoto received her Bachelor of Psychology from Otani University of Kyoto, Japan in 1983, then started performing professionally in her hometown of Osaka where she grew up studying traditional dance, music and theater. In 1985, she received national exposure performing Japanese Storytelling at the Silk Road International Exposition and on Kansai National TV. The following year, Kuniko traveled to the United States to study with Tony Montanaro, a highly respected mime and actor. Three years later, she toured with Leland Faulkner Light Theater where she helped present lavish stage illusions and brought ancient tales to life with shadows and magic. For the next five years she performed in theaters, schools, colleges, and festivals across the country.

In 1992, Kuniko left the Faulkner Light Theater troupe to move to Florida. She married Jon LeClair, a world-renowned magician whose books appear in magic shops worldwide. This helped her add subtle magic and mystery to her unique act.

Kuniko has performed in numerous venues of note such as:

Over the last two decades she has presented her programs throughout the United States. Her work has been recognized by the Florida, South Carolina, and North Carolina State Arts Council since 2000.

It’s fun and magical, creating out of nothing! With her step by step instruction, students will fold their own origami animal, flower or object in 30-45 minutes Live Stream.

No origami paper needed! Just a notebook paper or letter size paper will do.

Do you prefer a recorded tutorial video? It’s available. Please discuss with Kuniko.

What’s Origami by the way?

The art of paper folding. The name; ori means ‘to fold’ and gami means ‘paper’. Once in the 19th century of Japan, paper folding flourished. The paper crane was folded with a genius folding pattern, which evolved to complex designs amongst engineers and scientist in the 20th century. Today origami has been recognized not only in arts and science but in education. Research shows origami improves students 3d perception and logical thinking.

ahhh, what is it like? Find out more with Kuniko’s info video below!

Is transportation needed for this exploration?: No
Is financial assistance offered?: Yes

Summer or Family Programs Offered?: no